Yes, Clemson, Alabama, Ohio State, and Georgia are the teams most likely to be in the mix for the College Football Playoff and national championship at season’s end, provided that we are able to go ahead with bowl games in late December and early January.

It is obvious that if a full season is played, the usual suspects figure to contest the biggest prizes in college football.

However, let’s pause to realize — and absorb — this basic point: This season could easily become a lot more fragile than most of the seasons we have known. 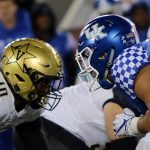 It’s not just the lack of a regular offseason workout routine for athletes which might make this season veer off into unexpected places. It’s not just the lack of full stadiums or intimidated officials which might create a whole new world. We have to prepare for the possibility that a significant player tests positive for coronavirus. What then? What is going to happen in college football?

Let’s keep in mind that if a prominent player gets COVID-19, that player won’t be able to directly interact with teammates due to the need to self-isolate. When a player sprains an ankle or suffers a concussion, he can still interact with teammates on the sidelines (in crutches or street clothes) at the following week’s game. That is not going to be an option or a possibility for someone who picks up the virus this coming autumn, assuming the season happens. 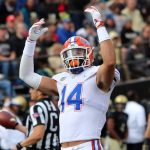 It will be enough of a hardship for a team to lose a prominent player for a week or two, but the world of sports has been enriched in countless instances by an injured star being able to personally motivate and/or mentor a backup who unexpectedly takes over a starting role due to an injury. The star player is able to take the backup under his wing and show that younger, less proven player how to perform.

Those instances of direct, person-to-person, face-to-face mentorship won’t be accessible this season if a star player gets COVID-19. The veteran could offer phone calls or zoom calls during the week, but gameday interaction and teaching won’t be available. 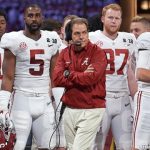 The news of Patrick Ewing getting coronavirus on Friday brings up the point that a world-famous American athlete has not yet died from this disease. We’re not trying to make any sort of argument against playing college football this season; we’re merely bringing up the point that this virus might still deliver a few scary stories — to school communities, teams, and elite individual football players or coaches — over the course of the season.

We, as SEC football fans and observers, need to be emotionally prepared for when a star player comes down with coronavirus, and creates the kind of domino effect we haven’t seen before (not entirely, at least). Hopefully every team will be completely safe and won’t be hit with the virus, but at a time when we should be guaranteeing nothing (or close to nothing), we have to allow for the possibility that important players — without getting injured or suspended on academic grounds — could still be abruptly removed from fall Saturdays.

Let’s take a brief moment to realize how precarious this season could become.

The most important football conversations the SEC must conduct right now

The most important word in the title of this story is “football,” not because SEC football is more important than public health, but because it is its own separate consideration.

Play or not, SEC athletes will keep scholarships and remain in good standing

The Southeastern Conference released a statement on Friday that addressed the status of players who refuse to participate in athletic contests in the fall of 2020.

BIRMINGHAM, Alabama July 30, 2020) – The Southeastern Conference has established September 26 as the new kickoff for its 2020 football season to allow its universities to focus on the healthy return of their campus […]